Welcome back to my foray into the 1930s. If you are over a certain age, the 1930s actually doesn’t really feel like an historical era but, you know, our mums’ and dads’ time, it feels ‘recent’. So it’s very easy to forget the massive changes and events that shaped, not just the 30s, but our own current era. I’m trying to give a little bit of the flavour of life in the 1930s in Britain.

This week I want to say something about technology, and about fashion. In some ways the two are inter-related. The zip? If you’ve never thought of that as a technological breakthrough—think again.

Can you imagine having no zips at all on your clothes? Trousers: buttoned or elasticated. Jeans ditto. Skirts, ditto. Jackets, jumpers, dresses… How would you close a long dress? Immediately any garment has got to be wide enough to admit either your hips or your shoulders, or depend entirely on button-type closures. Not that women habitually wore trousers in the 1930s, and jeans were very much an American work garment.

There was a reason men wore those long coats…

In fact the zip had been invented way back in the 1850s but in spite of lots of interest and various refinements of the design, it only became widely used in the early part of the twentieth century for boots, or for survival and specialist protective gear, and it wasn’t until the 1930s that it began to be used first for babies’ and children’s clothing, then for men’s trousers in place of the button fly. French fashion designers raved over its convenience, and emphasised that it had the benefit of preventing “The possibility of unintentional and embarrassing disarray”. (When I was a kid, public loos still had a notice just inside the exit reminding gentlemen to check they were ‘properly dressed’ before leaving the premises.) From there, due to the convenience and the ability to follow smooth lines, it came into the women’s and general clothing applications we know and love today.

Fashion was also the prisoner of technology with regard to laundering. Artificial fabrics had been around for a while, but were often confined to small items of clothing, or occasional items such as evening dresses or accessories, to avoid the need for frequent washing, due to their relative delicacy compared to natural fibres. Rayon and artificial silk required special laundering care, so it helped to have a maid with nothing better to do than to carefully iron your dainties.

Country wear for the well-to-do, especially for outdoor pursuits, was often tweeds by day, which were hard-wearing natural fibres, easy to launder—if you had a maid and somewhere to hang the garments to dry—and the pattern was great for disguising spills and light spatters (presumably blood from all the hunting…or maybe fish guts?). The colonies were still very much the mainstay of British textiles, with silk and cotton coming in from all over Asia, and the United States, either as fabric or as raw material to be made into fabric for the garment trade located in the Midlands and North. Hollywood’s glamorous influence on lifestyles meant that there was a greater demand for variety in fabric and in styles, and most women made the garments for themselves and their families at home, often completely by hand.

Very few households in Britain had washing machines in the 1930s, and tumble dryers were just a pipedream. Everything had to be washed by hand and dried naturally. The washboard and mangle (or you might prefer, wringer), were still depended upon as the main artificial aid to laundering. 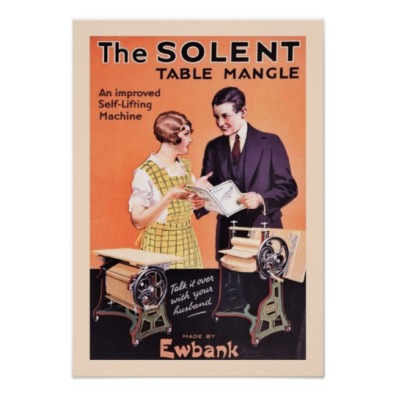 But by the 1930s, with the exception of the very poor or very remote, the majority of British households had electricity. The National Grid was set up in 1934 to bring together all the separate private electric producers and their varying tariffs. In addition to this, manufacturing processes had been refined. The Great Depression hit American factory production, but in spite of this, the 1930s saw the increase of the household appliance: vacuum cleaners, washing machines, fridges, central heating for the well-off, electric cookers, and so forth began to be desirable objects. There were also home-grown manfacturers such as Ewbanks of Accrington, Lancashire, still in production today. The marketing of their products was aimed at women, who were advised to ‘talk it over with your husband’. The advertisers promised a new standard of cleanliness and efficiency. The emphasis was on keeping up with the times, being seen to be ‘modern’ and scientific, and the promise of making the drudge of domestic duties ‘simple’. For the many middle- and upper-class families who’d lost most of their ‘help’ to the better paying factories, these items were very much the must-haves of the generation.

If you think this gave women more time to chat on the phone, well… yes I suppose it did. Many middle class and upper class homes had telephones by the outbreak of the second World War. Households began to have telephones from the 1910s, thought they were often treated with grave suspicion and a certain amount of contempt. But if you think you could just wander from room to room as you chatted, you’d  be wrong. The telephone was fixed in an out of the way place – a back lobby or study, and there you had to go to make your call.

And you couldn’t just dial the person you wanted to speak to. No! Although some areas did have a direct-dialling service, most did not. For most households, well into the 1930s, you had to ring the exchange and ask for a call to be put through to the number you wanted. If dialling out of your own area, you might have to wait for this to be completed. You had time to go off, make a cup of tea, and maybe a sandwich, and then the operator at the exchange would call you back and tell you the connection had been made. There were some automatic exchanges but remember, this was still relatively new technology and there were still many refinements to the system to be made.

Famously, Alexander Graham Bell suggested using the word ‘Ahoy!’ to answer a telephone call, but fortunately Thomas Edison came up with ‘Hello!’ and that remains good enough for most of us. From the exchange though, you might have heard those well-known words, ‘Go ahead, caller, you’re through.’

One thought on “Zips vs Buttons: The 30s: what were they like? Part 2”